The Maho-dou (MAHO堂) is a store owned and ran by Majorika. After she had been turned into a Witch frog when Doremi Harukaze pointed out all of the signs of a Witch, she forced the troublesome girl to work there to keep the Maho-dou in order to keep it alive. Over time the other Ojamajos began to also work there, and it has changed forms each season/series in order to keep the shop fresh and different, normally building around the theme of the season.

Each shop is around for a year or so before it is magically transformed into another shop. And a few other Maho-dou's have shown to exist. But in different places, not usually in the same state.

Originally titled Makihatayama Rika No Maho-dou, The Rusty Broom in the dub, until Doremi and co arrived when they felt as if it wasn't a friendly environment. Before the ojamajo came and spruced it up, Majorika only sold jewelry based charms. Due to winning the chance to own Maho-dou, Majorika's rival, Majoruka has been trying to steal it from her until she befriended her later.

Once Doremi and Co redesigned the shop, they began to sell charms and accessories all made out of clay. They also renamed it to simply MAHO-Dou, or The DoReMi Magic Shop in the dub.

Compared to the other Maho-do's the first season one was very basic. Originally it was creepy, old-fashioned, and not aesthetically appealing. After the ojamajo were told they would have to work there however, they decided to change it up by adding current, up to date items and brighter colors.

The outside consists of a small building with a tall tower covered in ivy that isn't used very much other then to go to the backyard if not through the door inside. It has many windows and a sign that hangs over the giant, front entrance window. A set of steps is needed to get to the door.

The main interior consists of a big room full of all the clay goods and a small desk in the corner next to a window area. On the opposite side of the room is a hallway with a few doors, one going to the backyard, and one leading to the magical world. Nearby is a set of steps leading to the upper floor, where magical beings usually appear or hang out to avoid being seen by humans. The ojamajo also make their goods there.

Flower garden Maho-dou , was the second form of the shop after the Ojamajo had become Witch apprentice once more. Together the four used their new Magical Stage of the season and along with the Witch Queen, they transformed it into a bigger building, gaining a connecting segment between the two pieces of building, a giant greenhouse and a tree. Hana-chan often slept in the top room or in the greenhouse area across the shop's main room for customers. Between floors were big circles where the Ojamajo could see between floors and talk with others if they had to.

In this Maho-dou the ojamajo had worked with Flowers in terms of becoming Florist.

Due to becoming a plant themed shop, many plants had been added to the outside ranging from flowers, ivy, thin bushes, and small trees. The tower was changed into a two-story entranceway, and where the shop used to be located remains, but the windows had changed and it was elongated in order to connect to the Green House where the Tree of Life is located.

The backyard had grown bigger and the witch world portal had been moved to be inside of the fountain located there.

Sweet house Maho-dou: After the group obtained new magic abilities and a new member to the group, the maho-dou was once again transformed into a brand new store. This time being a cafe/bakery.

The front of the store is where customers can order, but to the side and in the back are tables so the customers can enjoy their pastries there if they wished. In the back of the store was the kitchen where the Ojamajo baked, A set of steps led to a candy making machine and above that was Hana-chan's room.

The shape of the shop had changed once again. It lost many of the plants in order to focus on the sweet theme instead, such as the ivy around the steps and fenced area. The sign has been shaped like an opened chocolate bar with the shops name on it, while the shop resembles a triangle, shaped like a house of gingerbread or on a cake. The tall part of the shop was removed to make more room for the backyard, while the tree of life tower remains, it was changed in shape and given floored segments.

The witch door remains in the back, but behind a door. 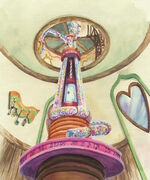 Add a photo to this gallery
.

Oshare zakka Maho-dou: After Hana-chan grew herself to be with the others. For the final time, the Maho-dou was upgraded. This one sold dress-up items and jewelry, along with some other things. But unlike the previous, the shop had only minor changes. The giant tree that began there since season two now fully grown.

The front room counts as the selling area, and the workspace. Hana-chan's room is still located on the second floor.

The witch door is still located outside but has been shifted to the side a little.

After Majorika lost ownership of the Maho-do, it had been given to Dela, who sold it to Majoruka. She had gone back to a darker theme, though she kept it fashionable in order to appeal to the humans. She also renamed it. In the dub, she renamed it to The Mystery Wind Magic Shop.

Owned by Majomonroe until her death, Momoko used to help out there. It was a small sweet shop in New York, and someday Momoko wants to reopen it. After Majomonroe's death, the maho-do became vacant, because no other witch decided to take care of that place. 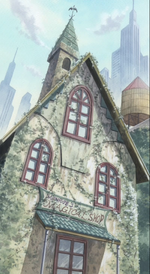 While the girls assumed the Maho-do to be shut down since their departure from Majorika, Doremi was shocked to learn that it was still running years later. She, along with the others have decided to work there again and because it made the most money, they turned it back into a sweet shop.

Maho-dō will be transformed into a share house in Ojamajo Doremi 20's.

Retrieved from "https://ojamajowitchling.fandom.com/wiki/Maho-do?oldid=45463"
Community content is available under CC-BY-SA unless otherwise noted.