Misora is the city/town featured in Ojamajo Doremi. It's located in Japan and surrounded by a vast ocean. Much of the series takes place in the town of Misora, due to it being home to all of the Ojamajo.

The town is inhabited by people of all ages and seems to be very modern and normal. Both Doremi and her sister Pop Harukaze, along with Hazuki Fujiwara were born in Misora. While the other ojamajo were born elsewhere, but eventually came to Misora throughout the series.

So far known are:

Misora is a real neighborhood in the city of Yotsukaido, at the Prefecture of Chiba 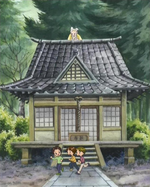 Add a photo to this gallery
Retrieved from "https://ojamajowitchling.fandom.com/wiki/Misora?oldid=37617"
Community content is available under CC-BY-SA unless otherwise noted.